The Power of Social Media: How Social Media Made Alabama’s 2nd National Title in a Row Look Like Nothing Compared to AJ McCarron’s Girlfriend 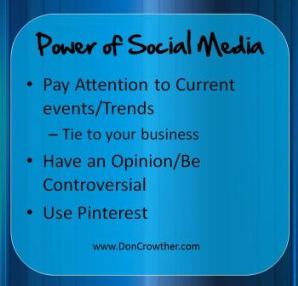 The BCS National Championship game was held on Monday night. No one was quite sure of the outcome. But, I bet no one expected this. The game was a blow out with Alabama beating Notre Dame by quite a large margin. But, it wasn’t the Alabama players that became famous (even though they won their 2nd National Championship in a row). It was AJ McCarron’s girlfriend who became an over night star.

Now we know she actually has a name, Katherine Webb. The ESPN announcers panned over to her and talked about her a bit. Since MondayÂ  night’s game, she has had tens of thousands of new twitter followers. She became an overnight sensation through socialÂ  media.

If you google her name, there are pictures, tweets and tons of blog posts already written about her. What does this say about the power of socialÂ  media? The news media is what started the infatuation, but it was the social media, primarily Twitter, that fueled her to stardom.

With the day and age we live in, once people jump onÂ a band wagon, it goes viral. Now how can you use this information/power in your own social media?

So, how do you use current events or trends in your social media? Also, do you think Katherine Webb deserves the attentionÂ  she is getting?