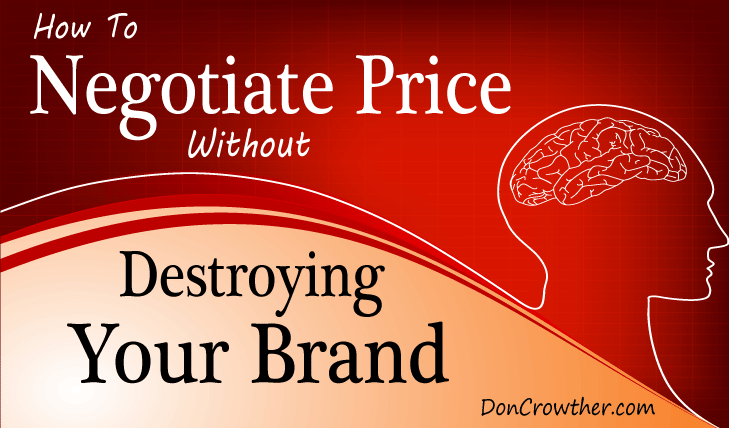 Does this sound familiar:

Prospect: “We really love this proposal, but we just can’t pay the price you’ve proposed. Would you be willing to give it to us for $X?”

Congratulations, you’ve just found out that your prospect is interested in your offer,

Warning: Whatever you say in response to any initial “Price Negotiation Zone” question has huge ramifications for your relationship with that client, everyone they refer and for your brand and profits for the long term.

Of course, the natural inclination at this point, especially if you really want/need the job is to either agree to do the work at that reduced price, or to counter with your own number and negotiate based on price.

But after a lifetime of negotiating business deals, I can tell you that caving into requests/demands to reduce your price is a HUGE mistake that affects your relationships, your value perception to the client and your brand.

Nope, that won’t work. If you tried that what would happen? The cashier would stop bagging your groceries and ask what you want to return until your total was $90.

Why? Because that’s the way grocery stores work in the U.S. – it’s a fixed price transaction, where you clearly understand what everything costs and there’s no negotiation about the end amount.

And that, my friend is exactly how you should react when someone asks you to negotiate.

Because negotiation IS a “normal” part of many service-based transactions, most people expect to be able to negotiate on price.

But what you have to do is to train them that your prices are fixed, that you’ll provide great value for that price, but you won’t devalue your services by pure price negotiation.

Here’s the principle behind the system I’ve used for years:

When someone asks you to negotiate price, happily show them lower cost options where in order to pay less, they’ll get less in return.

Let’s go back to the example at the beginning of this article, but this time I’ll include numbers:

You: “I totally understand. It will be tough to hit that number, but here’s what we’ll be able to do – we could reduce the price to $15,000, but in order to do so, we’ll have to take out the customer survey, the report on your customer service weaknesses and the training of your customer service staff. Now, I wouldn’t recommend that path, because as you’ve stated repeatedly, one of your biggest concerns as a company is customer service issues, but that’s how we could bring this project in for $15,000.”

Prospect: “Oh, that wouldn’t be good at all, we definitely need the customer service part of the project. Is there any way we could still get that for $15,000?”

You: “Well, the only way we could give you the customer service parts of the proposal and still hit your $15,000 price target would be to cut the marketing automation steps we discussed, but I wouldn’t recommend that either, as that’s the key to achieving your objectives for next year.”

Prospect: “So what I’m hearing you say is that the $20,000 price is fixed and the only way you can reduce it is to reduce the services you’re offering, right?”

There, what you’ve just done to clearly and firmly communicate that your price points are non-negotiable and that you live by your word.

And that positioning in your customer’s mind has huge long-term positive effects on every aspect of your work with that client and others they will refer to you!

So what happens next?

But in cases where they really can’t pay the full amount proposed, I find an interesting behavior usually happens.

When they start looking at the project piece-by-piece, both of you quickly recognize what’s really important to them in the project. They carve those items out and they usually end up paying not the $15,000 but somewhere between there and the original $20,000. So you end up making more anyway!

And, by the way, those elements they carved out become the basis for another project proposal later on when they’re thrilled with what you’ve provided them in the original project!

Does this work? Would I recommend it to you if it didn’t?

Of course it does!

In project after project I’ve used this process to increase my earnings, reduce my workload, and achieve happier clients as a result!

And there’s a kicker – would you like to know another way to make this process work even better, that significantly increases your ability to close the deal for the full amount of your original proposal? Simply Click Here and I’ll email you a two-page document that shows you how to take this process to an even higher level of success!

KEY LEARNINGS AND ACTION ITEM: Never negotiate on price alone. If a prospect insists on your reducing the amount they’ll pay, do so by decreasing the amount of goods and services they’ll receive in exchange for paying you less.

Read Other Articles in our popular Pricing Series here:

Pricing’s Million Dollar Question: How Much Should You Charge

The Psychology of Pricing