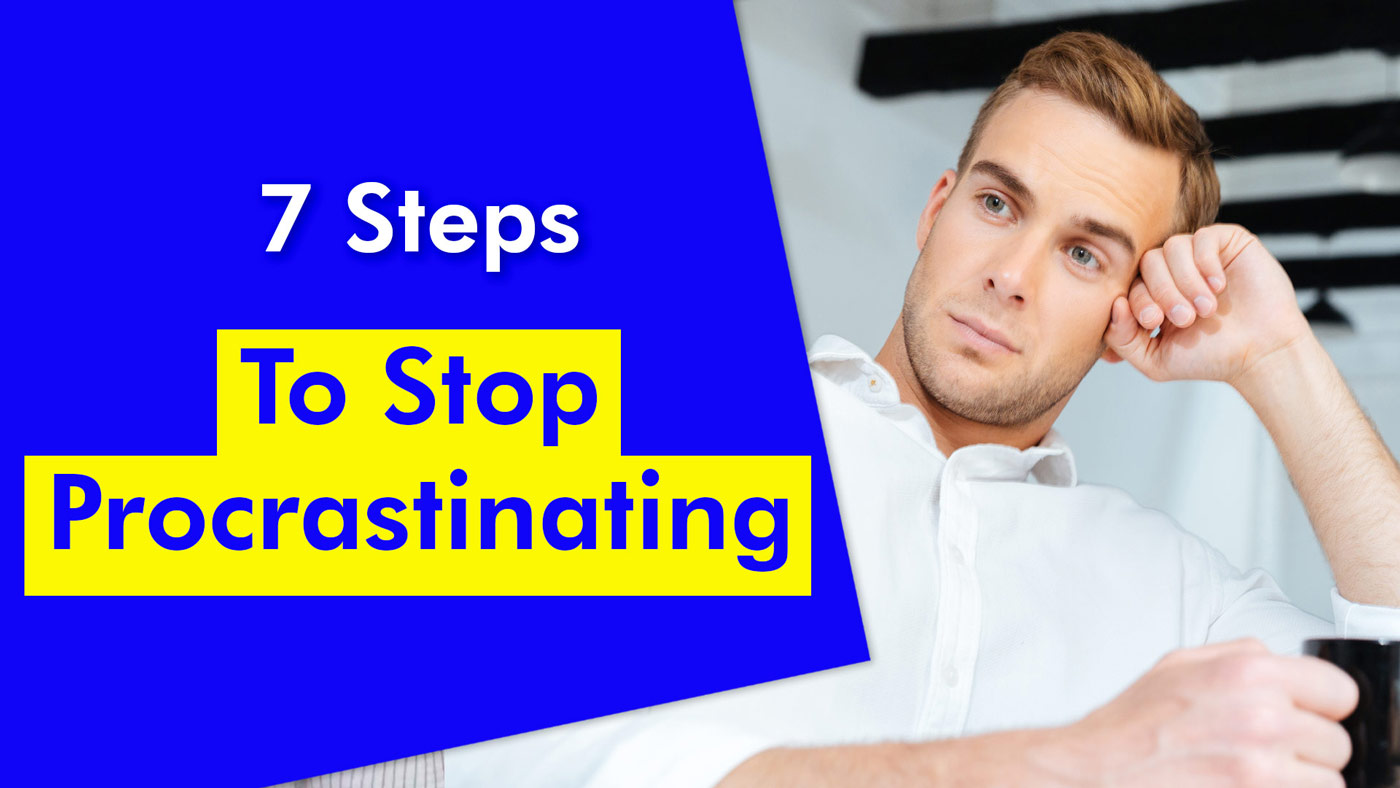 I, like you, am constantly working on how to stop procrastinating. Procrastination’s like this beast that sits there in the background and occasionally reaches up its claw and tries to grab you and pull you down into the morass of getting absolutely nothing done.

So, how do we stop procrastinating? How do we shift from procrastination to getting things done, to being more productive, motivating yourself, and focusing?

In my ongoing personal battle to stop procrastinating and become more productive, I have figured out a few things that helped me. Let me share them with you.

Some people fight a special kind of procrastination – perfectionism.

Perfectionism happens when people procrastinate because they’re trying to get that thing perfect right out of the gate.

The reason we procrastinate because of perfectionism is really that we’re afraid of failure. What’s really happening is that we’re not putting it out there to the world because we’re afraid it will fail.

As long as that fear is bigger in our minds than the rewards and the learnings that will come from getting it out into the real world, we’ll always be able to find something less than perfect, something that can be improved before going live.

Wouldn’t it be nice if we could just make our perfectionism go away that simply. I realize that’s not going to happen, but let me share something that’s helped me:

I ask myself two questions:

So let’s say you wanted to created an opt-in incentive and a squeeze page to get people to give you their email address to get it.

This is what I just did. Just last night I followed my own rules. I spent no more than two hours and wrote my opt-in incentive.

As I did so, I asked myself the two questions:

See how that process works? By realistically thinking through the risks and consequences of the worst-case scenario, it quickly becomes clear that this isn’t actually as big of a deal as our inner scardy-cat would have us believe.

As long as perfectionism is what you’re battling to stop procrastinating, you’ll always be fighting an uphill mental and emotional battle.

But when you step beyond the excuse of perfectionism to its actual cause (fear,) you gain power over your natural self. You can then think logically through the risks and consequences and make logical decisions without the burden of perfectionism.

In most cases, failure is no big deal. The thing you’re afraid of, though it is not something you desire, in the big picture, it’s inconsequential.

Now, you can properly weigh the options between waiting longer to “fix” whatever can be improved, with the advantages of the results and learnings you will gain by getting it out into the marketplace now.

And you can logically realize that if there are crippling problems you can also fix them after the fact.

So you might as well just get it done.

2. Do More Rather Than Doing Less

This brings up the concept that I’ve found to be the single most important element in my personal mission to stop procrastination.

Is realizing that procrastination makes you want to just do the absolute minimum. I’ve found that the best solution is to do exactly the opposite – do more rather than doing less.

In our example of opt-in incentives. If you really want to build an email list of potential customers, Instead of putting one up there, putting all your eggs in that one basket, basing your entire business on it, put 30 out there.

Spend 60 hours, create 30 opt-in incentives, plus another 30 hours to program each one and then throw them all against the wall and see which one sticks.

Which option do you think is most likely to succeed?

Yes, you won’t get there immediately. But if you shift your mindset from “this is my only shot, it has to work, so it has to be perfect” to “this is this shot, if it works, great, if not, I’ll improve it, and maybe try another next week”

So many people try to build the perfect marketing funnel, the perfect launch, the perfect email gathering system where in reality, the probability’s incredibly high, that whatever you do, even though you do it the very, very best way you possibly could, you’re probably not going to hit a home run with that.

That’s reality. So, instead of procrastinating, go to bat a hundred times, strike out 60, hit a single 20, hit a double 10 and maybe hit one home run in that hundred times. Do more rather than less.

This is one I really struggle with because what I want to do is I want to start the day by racking up some easy wins.

But what ends up happening when I do that is the thing I’m procrastinating is supposed to happen at three o’clock. And three o’clock comes and then I’ve got something else that I think that is more important that day.

What I’ve found is that when I put it as the first thing in my schedule, when I stop procrastinating and put that item first in my day, then I get it off my plate and it’s just done and I can move forward, no longer having to deal with the fear of failure.

One great way to do this is by using the 48-minute method.

3. Set Deadlines With Rewards And Punishments In Them

I really want to watch this show everyone’s talking about on Netflix. So, I use that as a reward to stop procrastination. I make a deal with myself: if I get this thing done by Friday at five, I get to watch it. If I don’t, I’m working the weekend, doing that thing. (And by the way, if I don’t get it done by 5:00 on Friday, I don’t get to watch the show until I complete that thing AND another – punishments are valuable ways to stop procrastinating too.)

There are lots of ways to do this: food, experiences, time off, etc.,whatever works for you, there’s procrastination stopping power by building rewards and punishments into your life.

And while we’re on the subject, Hey, why not just make that a public commitment? Tell people outside of yourself, what you’re going to do. So that they’re looking for it. So they’re bothering you because you haven’t done it yet. This is really powerful.

5. Get A “Mean” Accountability Partner

One of the best ways to stop procrastinating is to get a “mean” accountability partner. Mean’s the key – here’s what I “mean…”

How should they react when they hear that?

Most of the time, they want you to give them mercy when they blow it, so they give you mercy when you blow it.

“All right, I’ve blocked you off on my calendar at three o’clock. I’m expecting a phone call from you where you’re going to report the fact that you’ve gotten that done today.”

If you’re a person who struggles with procrastination, you really should go find a mean accountability partner.

You may also want to put some teeth into the game for certain projects that are mission-critical. For example, what if you were to send your accountability partner a $500 check they can cash it if you don’t get it done by Tuesday at five o’clock.

All of a sudden, you’ve just turned your accountability partner into somebody who actually helps you get things done, to stop procrastinating.

Here’s another one: take risks early in your plan – in your year, in your day.

For example, let’s say you want to launch a product.

What if you did the launch earlier in the year, rather than later? That way, if your worst case actually happens, and that launch doesn’t deliver what you want it to, you’ve still got the rest of the year to solve that problem and bring in the revenue you expected.

And, if best-case happens and it succeeds, you’ve got the rest of the year to take your business to the next level or just be able to purely give people great content, serve their needs and build your positioning in the marketplace.

This same thing applies if you look at it in terms of your day. I suggest you start your day, with the thing that is your highest risk activity for that day.

Let’s say for example, that you’ve decided that you’re going to call three people and talk to them about doing consulting with them, call them early in the day.

That way you’ve gotten it done. You’re not procrastinating it all day.

And, you know the results early in the day, and you can adjust the rest of your day, according to whatever the results that happened early on in that day.

How To Stop Procrastinating

I’ve just shown you some techniques that work for me.

As I said, I’m far from perfect in this. I’ve not solved the problem of procrastination in my own life.

In fact, I’m pretty good at this procrastination stuff. So I’m constantly trying to work on it.

What I’d love to hear is, in addition to things that I’ve talked about here, what are some of the things that you have found are valuable in your own personal mission against procrastination? I’d really appreciate it if you would share that here, in the comments.

Your ideas and methods will help me and they’ll help all of us stop procrastinating.

This is Don Crowther, saying just go do this stuff.