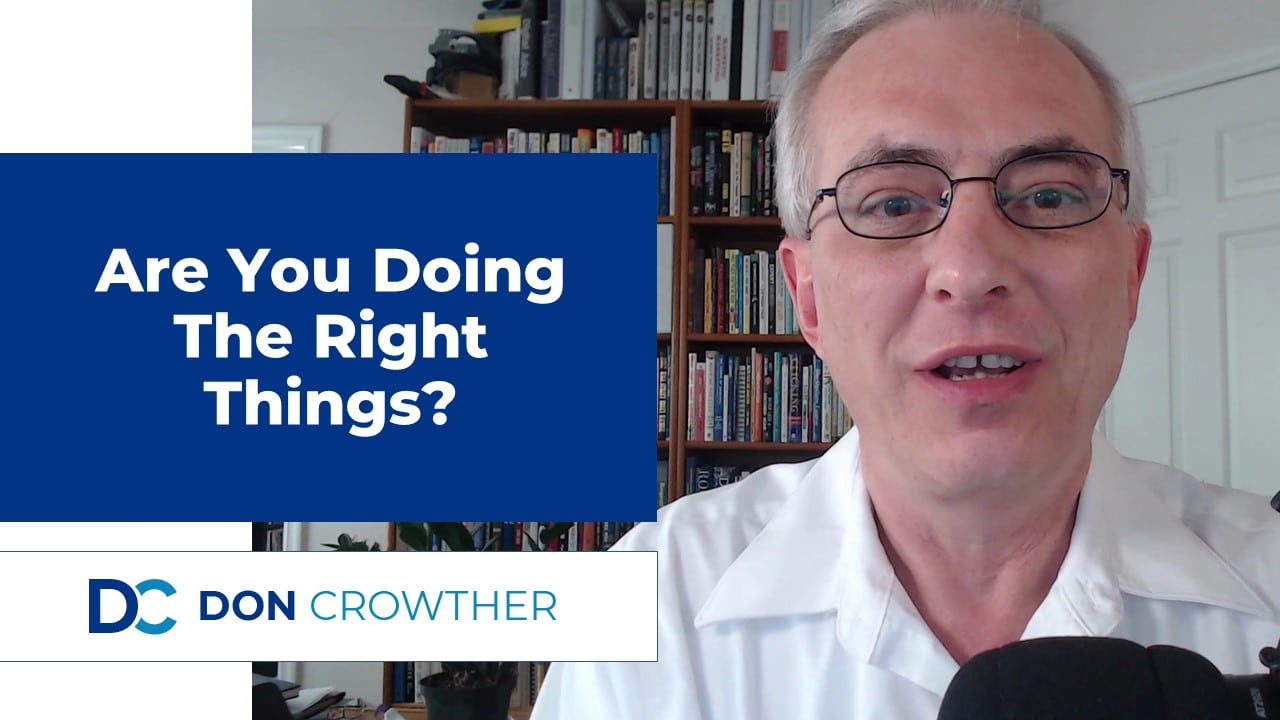 So many of us spend our time and energies focusing on doing things right when we’ve never asked the question “am I doing the right thing?” Here’s how I discovered that in my own life.

So many of us go through life working so hard all the time on doing things right yet so often we never really ask ourselves the question, am I doing the right things?

Here’s the cool thing, when you start doing the right things, it’s so much easier to do those things correctly.

In a previous video I told you about high jumping. I’m going to tell you another track story here for a minute.

Seventh grade, Junior High School, I went out for the track team, I’ve always been pretty fast, and did a lot of running in grade school so it seemed to make sense.

When I made the track team and had to choose a race: those shorter races – they looked pretty cool because you get done with them really quickly and you don’t get all that tired.

But there was a problem. I didn’t do them very well.

I had this problem. When the gun went off, I came out of the starting blocks, stood straight up and started running. While I actually ran most of the race as fast or maybe a little faster than everybody else, in every race I lost a second or more just getting out of the blocks. By then, everybody was three or four steps ahead of me and I just couldn’t ever catch up with them.

The coach tried to help me fix that by using an old trick of tying a rope five feet off the ground ten feet from the takeoff line. If I started correctly, I would still be down and driving forward using my legs and momentum to propel me forward. But, if I did what I normally did and popped up vertically and started running normally that rope would clothesline me right across my throat and down I’d go onto the ground.

He meant well, but since I never quite figured out how to do it correctly, I got floored by the rope and a whole bunch of times.

At that time, I had a really good friend, his name was Jamie Nells. (Jamie, I’d love to connect with you if you ever hear this.) Jamie was an American Indian child who lived two doors down from me.

Back in those days, they used to take Indians from the reservations and put them as basically foster children in peoples’ homes for the school year. Then they’d go back home during the summertime. Jamie was one of those kids.

Jamie was a runner. One time I asked him, how did you get so good at this? He told me that there was a tree five miles from his house and he would run to that tree every day, one to three times just for something to do. And I asked, “what about the other trees? Why was this one so special?” “Don, you didn’t get it. There was a tree five miles from my house.” Apparently there weren’t a lot of trees where he lived.

I’ve told you in another video the story about running up to the B on the mountain and putting chalk on my pants each morning.

Then after school we’d have a regular track practice.

But then, after coming home and doing our homework one day I got a phone call from Jamie where he said, “Hey, let’s go running.” I replied “Jamie, are you nuts? We’ve already been running for hours today. What are you talking about?” And he said, “Don, let’s go running.”

And so Jamie and I started going up into the mountains above my house where we would run those mountains back and forth for an hour or two a night, probably two, three, four times a week.

What became clear, very quickly, was I wasn’t a sprinter. I was a distance guy. So, the next year when track practice started, I was running distance races instead.

Now Jamie was amazing. At that time, the longest race they would let a seventh grader run was 1320-yards, so three laps around the track. I’ve seen him lap people several times in a race that only ran three times around the track. That’s how fast Jamie was.

What happened as Jamie and I were running up in the hills, was that he was forcing me to keep up with him at his pace. That turned me into a distance guy and I’ll always be grateful to him for that.

So, I became a miler.

The mile is the world’s greatest race. There is none better. It is just short enough that you don’t die at the end of it, but it’s long enough that you can run it strategically and do it really, really well.

When you run distance races there’s a thing called “split times” where every time you come around the track, they click the stopwatch again and they keep track of how long it took you to run that lap.

And here’s the point of this whole story.

A mile is four laps around the track. The last lap of the last mile race that I ever ran competitively, my split time for that last lap broke the state record for my age group for the 440. Now this was just a junior high school record, it’s not a big deal. Okay?

But the important thing is this: I spent a whole year trying to figure out how to run the 440 and the 220 and the 100 right.

But once I started running the right race for me, I actually was able to run that 440 better than I’d ever run it while all I was doing was working on just doing that every single day.

So, my question for you is this. Are you doing the right thing?

Because when you’re doing the right thing, it’s a lot easier to do things right.

Are you doing that thing that you’re here on the earth to do?

And the bigger question than that is, how can you do that thing that you’re here on the earth to do?

Now I realize that, for some of you, that thing that you’re here on the earth to do is something that doesn’t seem to translate directly into something that can make you money and put food on the table. So, some of us, have to figure out a way to make that thing become something that we can do profitably.

But there’s absolutely is hope. I work with a number of people who do things that wouldn’t normally be considered areas that are highly profitable, like helping people create vintage clothing, or that help people knit, or cook nutritious meals, or raise happy kids, or take care of aging parents, those kinds of things. It is absolutely possible to take something that you’re really good at that traditionally will never put food on the table and turn it into a very profitable business. Especially with the online world and the ability to teach things online, you can take things that formerly you could never make any money with and actually make a very good living, by helping other people do that thing.

So again, I ask the question, what is the thing that you were put on the earth to do? What is YOUR right thing?

And how can you do that for your life?

This is Don Crowther, just go do this stuff!