How much do you know about China and the state of social media there? Let’s put it this way, if you think that North Americans dominate social media, you’re wrong.

The first thing you need to know about Chinese Social Media is that it is big. As in, big big!Â  Think one billion registered users big.

Not only are these billion Chinese folks online a lot, they’re on social media a lot. Studies reveal that roughly 92% of them use some form of Chinese social media.Â  What kind of social media?

Well, it’s sure not Twitter! Did you know that the Chinese government actually blocks Twitter from its citizens? So you could have the world’s most savvy, popular Twitter campaign and still never reach 400 million of your potential customers.Â  (The same goes for Facebook, btw. The Powers That Be over there aren’t big fans of Zuckerburg’s little blue powerhouse and have blocked it too. That said, their alternative to FB is called QQ and it is incredibly popular. It’s currently got one billion registered accounts and 500 million monthly active users!)

So what elso do they use? Some of the top Chinese social media sites include douban.com and t.sina.com.cn (You can find a bigger list and more info here.) And they’re not just using one network. The average Chinese Social Mediaphile has 2.78 different accounts. And a full 50% of them actually have their own blogs! That’s 200 million plus blogs in China alone!

Starting to realize how net-savvy and available these potential customers are?

But, people in China, even though there are a lot of them, don’t have any money, so it’s impossible to actually do business with them right?

Yet another misconception dashed to pieces by the facts. Let’s take just one company, Tencent, the creators of QQ.com, instant messaging, a multi-media networking service called Qzone, and a number of SMS games.Â  Before I mention this, remember that Facebook is now “on their way to profitability” and that Twitter is believed to have made enough money to do better than breakeven in 2009.

Tencent, on the other hand, which trades on the Hong Kong Stock Exchange, so is required to make regular, authoritative reports, just announced that they made $264 million in after-tax profits.

And did I mention that those profits were just from the first quarter of 2010?Â  And that only 13% of their revenue came from advertising (the primary source for US social networking profits)?

Yes, there’s money to be made in Chinese social media, you just have to think Chinese, learn their market, and build content that Chinese surfers want to view. 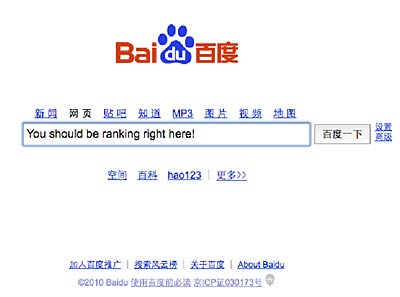 By the way – I’m saying that you should definitely pay attention toÂ  Chinese social media. But it doesn’t end there. You should keepÂ  your SEO eye on them as well. China’s leading search engine “Baidu” has a 75% market share in China and it’s growing by leaps and bounds every single year.Â  Oh and don’t neglect that mobile marketing thing either. Why? Because mobile is HOT in China.Â  233 million use mobile devices when they go online.

Finally, you need to know that when Chinese citizens want to travel (and 50 million of them do, each year) a full 70% of them use the internet to research their trip. Wouldn’t it be great if even a tiny percentage of that 50 million found YOU and your company?

What are you doing to capitalize on the huge Chinese social media marketplace? Share your thoughts by writing a comment below.