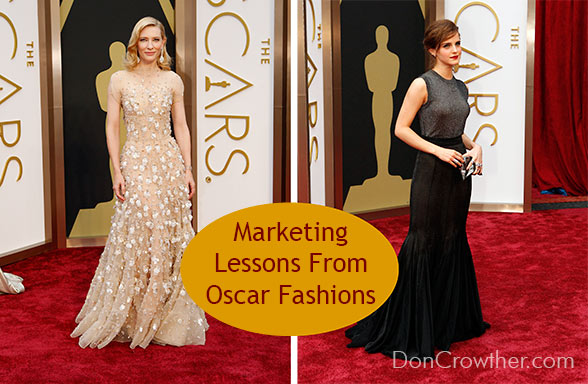 Best picture has been awarded, now it’s time for the annual Best and Worst Dress of the Oscars parade.

We could talk about the fashion wins by Cate Blanchett, Emma Watson, Sandra Bullock and more, but instead, let’s focus on the marketing lessons we can learn and apply from the fashions of the Oscars.

Here are four that immediately come to mind:

1. Adding emotion to your marketing can significantly increase its impact.

A Reuters study showed that 67% of Americans haven’t seen any of the best picture nominees  yet approximately 40 million viewers tuned in to watch the awards.

Live events like the Oscars, The Golden Globes and the Grammys work because they tie into a core emotion inside each of us to belong – to feel like we’re part of the group because we’re doing what the rest of the group is doing. A piece of that is the fashions: even though most people haven’t seen 12 Years a Slave so can’t directly comment on whether it deserved to win Best Picture, everyone can weigh in about Sandra Bullock’s dress. They’re part of it. Their opinion counts as much as the next person, and they’re emotionally connected to the process.

Likewise there are only 2 teams in the Super Bowl, yet each of the last four have ranked as the most watched program in history in terms of TV viewers. You can bet that most of those people were there not to watch those particular teams but to participate in the experience of the game, AND to watch the commercials. Their commentary on the match up of a puppy and Clydesdales versus a Doberhuahua adds emotion and belonging to the event.

Question – how can you add emotion to your marketing, especially emotion that brings your audience into the conversation and enables them to feel connection with your marketing?

How can you use your marketing to create emotions in your target audience?

2. Sponsorship is worthless (from a marketing perspective) if nobody knows about your sponsorship

Clearly the clothing designers recognize that unless the star mentions their brand, most of their efforts were worthless. So, in the red-carpet pre-Oscar show, each star made it a point to name their designer, to ensure they’d get future chances at wearing designer gowns at other events.

But let’s consider for a moment the jewelry and the shoes. 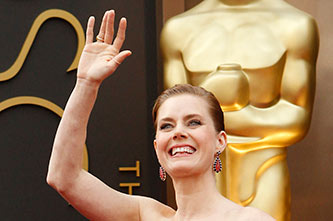 Virtually every one of the stars wore designer jewelry and shoes, and as I understand it, at least some of that jewelry is loaned to them for the occasion. But how many of them mentioned who created the jewelry or the shoes they wore?

The dress designers clearly got more marketing value out of the event than the jewelry and shoe designers!

Now, I understand that many times you give because you want to give. But, if you’re giving for marketing value, you MUST figure out how to let people know you’re the sponsor.

Make sure that your sponsorship gets noticed!

3. You MUST get blunt, frank, accurate advice from people who have nothing to gain

I’m the last person who should be critiquing fashion, but even my eyes can see that:

Glen Close should be shooting anyone who saw her trying on that disaster of a dress and didn’t say “Uh, Glen, this isn’t working for you.”

And Whoopi’s friends should be hiding their heads in shame for allowing her to go anywhere wearing that embarrassment especially if there’s even the slightest possibility of a camera being present. 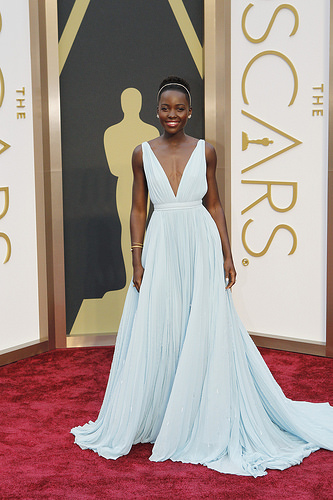 And, (your opinion may differ on this one,) though Lupita Nyong’o designed her own dress with Prada, why oh why didn’t someone say “Lupita, waist down is gorgeous, but let’s do some more work on the top half” is beyond me…

The lesson to be learned is that every one of us is blind or at least partially blind to our own work. Each of us needs to have a small group of experts we can trust to be accurate and have our best interests in mind to bluntly say what needs to be said.

But let’s take that another step.

Some things are obvious, other things are nuanced. But those nuanced things can be disastrous to total results. That’s why having someone look at each part of your marketing, asking how this individual piece will play with your target audience, can be invaluable and will prevent many a marketing disaster from happening.

4. Tie-ins are more effective if they are directly connected to the audience receiving them

I would argue that the Oscar fashion critique is good and should continue, but everything could and should be kicked up another notch by bringing the 40 million viewers of the Oscars into the mix.

Isn’t it interesting that Ellen almost brought Twitter to its knees with a tweet during the program, but the Academy hasn’t figured out how to social media to their advantage? 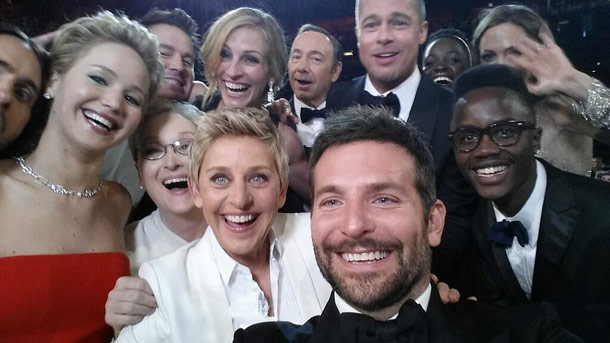 In other words, let the Academy use their omniscience to tell which movies were REALLY the best, but then give us (who will likely disagree with the “great minds” of the Academy) the ability to weigh in ourselves. Now people have skin in the game, they’ve got a reason to stay to the end (award the audience choice award just before the best picture) and to actually watch the movies in the competition.