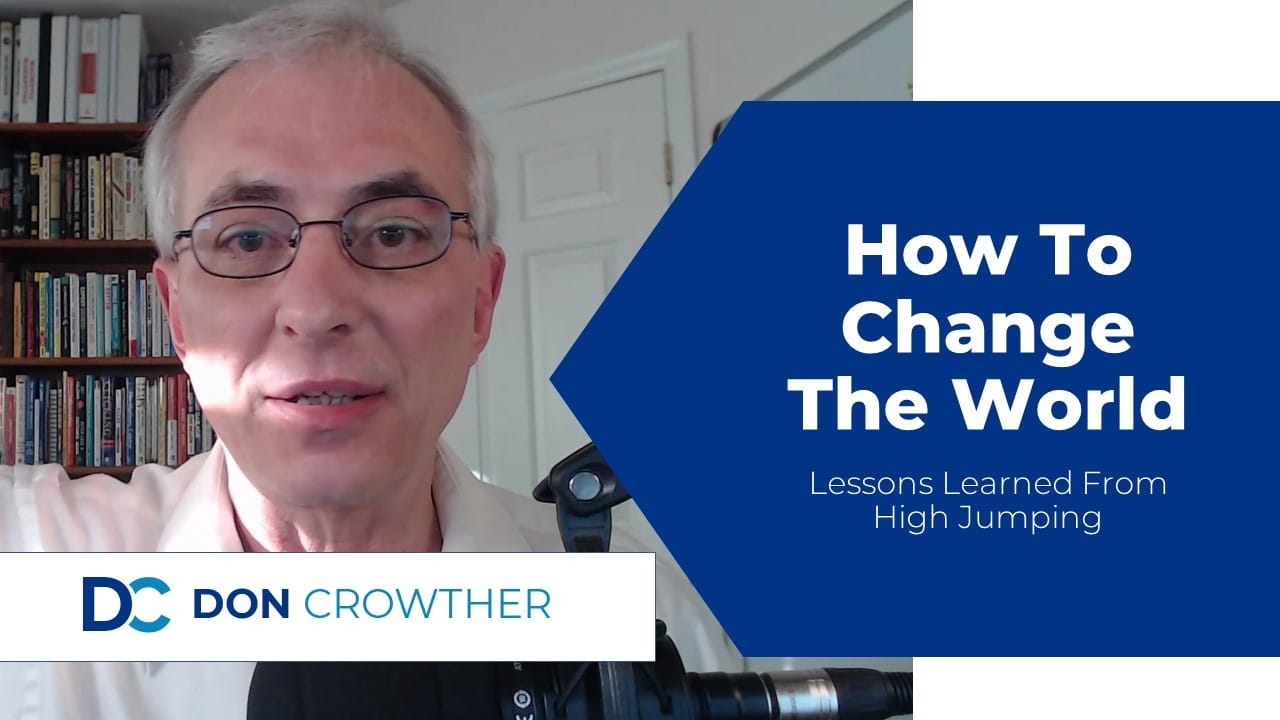 I’m convinced that in almost everything, there’s a better way.

Our job is to figure out what that is in our lives and in our business.

AND what’s really cool is when you figure out that better way, then share it with others. That way you change the world…

Back when I was in junior high school, I had a pretty good vertical jump. It was about 32 inches. So, if I reached as high as I could and made a mark on the wall with chalk and then I jumped and like made another mark, the difference between those was 32 inches. And by the time I got to high school it was up to 36 inches.

One day my track coach came to me and said, Don, you’ve got an amazing jump. Let’s get you high jumping. So I set about to figure out how to do that.

I didn’t have any problem with the first part of that exercise, that was simple. I could jump, and get my body way up over the bar. My first foot, that was fine too. My problem was that bottom foot was a stupid foot and either my heel or my toe kept catching that bar on the way down.

And the problem with high jump is that it’s pretty binary. You don’t get credit for getting 95% of your body over the bar. If anything knocked that pole off, you didn’t succeed

I guess the lesson is it helps to be coordinated if you want to high jump well. Which at the time, and still today, I didn’t have that ability to say that I was coordinated.

I had basically given up when one day something happened. A guy named Dick Fosbury came into the world and he looked at things and asked “is there a better way?”

And sure enough, after lots of experimentation, he found a better way. It’s called the Fosbury Flop.

The Fosbury flop is the most ungainly, inelegant, frustrating thing to watch, because (and I realize as I say this that most of you have never seen it, but) the straddle method looks so elegant and pretty in comparison.

When you do the Fosbury Flop you run towards the bar, you jump, and then you turn backwards as you’re going over the bar so you go over the bar looking up at the sky instead of down at the bar (which is very odd the first few times you do it, because you have no idea of where you are in relationship to the bar.)

The secret is first off, not to hit it on the way up, so you have to jump just far enough away from the bar so that your bottom doesn’t hit the bar on your way up. The second secret is wait patiently as your body passes over the bar then to kick your feet up at the last second so that they clear the bar too.

The interesting thing, when you look at pictures of champions using the two methods is that it’s clear that the Flop will always outperform the Straddle because straddlers are consistently just an inch or two above the bar. But the body of the floppers is usually several inches, even half a foot above the bar at the peak. It’s just the process of getting those feet over.

Jumping lesson ended. Now let me share he cool thing that happened to me.

I saw Dick Fosbury jump on TV one day and I said, I got to try this. So I went and in two weeks of working on it, increased by 14 to 15 inches. And that’s amazing in the high jumping world. You just don’t improve your personal best by huge margins like that.

If you look in the history of high jumping in 1957 the world record is seven feet, one inch.

(By the way. If you’re six foot tall, this person is getting his whole body over a bar that’s one foot higher than you are tall.) For three years that record stood and then it went up by three eights of an inch, one centimeter, in 1960 here’s somebody else who jumps it also in 1960. The next record is set by the same guy who manages again to clear it by another centimeter. He’s now up to one foot seven eight inches. We’re going up by half an inch. That’s what happens in high jumping.

So, for somebody to come in and all of a sudden start jumping 14 inches higher than they were before? That’s incredible.

Caveat: I’m not going to say I was great, because before I was jumping like four feet, four feet high. Like I said, I had a very stupid foot. But now I’m jumping five foot two inches, which was pretty good for a junior high schooler, but it didn’t set any records.

But the important thing for me was this: I was now jumping 20% higher than I had been jumping two weeks before just by making a change in what I was doing.

And it didn’t just happen to me. All of the sudden a whole new set of records came into being, (the last world record using the straddle is over 35 years old) and now people are jumping over bars that are more than 8 feet above the ground.

8 feet, by the way, is the height of the standard ceiling in the United States. Most people can’t even touch the ceiling when they jump, they can’t even imagine getting their entire body over a bar set that high.

Look up. That’s how high people are now able to jump, all because of someone figured out a better way.

Dick Fosbury. With his Flop.

My question to you is “What are you doing to change the world?”

Or, a different question. What are you doing to change YOUR world?

One of the things I’ve discovered is that every once in a while there are moments that happen that change everything.

A small group of people in a sliver of land along the coast of a place called America decided they wanted freedom from kingly rule. And within 10 years after they achieved independence, France falls, and huge changes in the way countries are governed roll through country after country throughout the world.

There are many times in the world where a single change, maybe a new idea, possibly a new discovery or a way of doing things changes the world in a fairly short period of time.

We have one of those moments right now.

None of us chose it. None of us wanted it. But change has occurred.

And my question for you is, “what is your Fosbury flop?” What are you learning about yourself, about how you act, about how human beings act, about how businesses act, how to change yourself and then how you can take that change and communicate out to the rest of the world?

So that this period of time, this short period in the entire history of the world that’s just a bat of an eye in the overarching timeline, can literally start to change the world.

Are you going to be one of those people who will do it?

Are you a person who’s pouring this time into binge-watching every single thing on Netflix and Hulu and HBO?

Or are you a person who’s pouring your time and energy into figuring out how to change so that when this gets over, you’re a better person and you’re helping to change the world to be better too?

Are you doing it?

Are you going to do it?

What are you doing to make that happen?